All You Need to Know About Insulating Paint

What Is Insulating Paint? 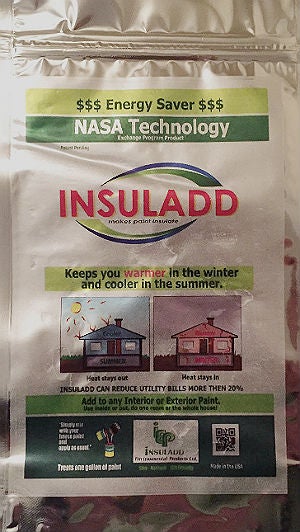 The notion of a paint to reduce heat transfer first arose at NASA in the hope of protecting the space shuttle from the extreme heat generated by reentry into the atmosphere. NASA scientists developed an additive that contained tiny glass spheres called “microspheres,” epoxy particles, and heat-resistant chemicals. The mixture was sprayed on the shuttle at the same time it was painted to form a protective coating. NASA later partnered with a company called Tech Traders and, expanding on the original insulating technology, to develop an insulating powdered paint additive, known as Insuladd, which contains microscopic ceramic spheres said to form a “radiant heat barrier” when mixed with regular interior or exterior house paint. Today, Tech Traders owns and sells Insuladd. Other manufacturers have since begun producing their own brands of insulating paint that contain either ceramic or glass microspheres—either as an additive or as a premixed paint product—both of which are marketed to homeowners for interior and exterior use. In addition to Insuladd, brands include Hy-Tech and Therma-Guard. Manufacturers advertise insulated paint as being able to reduce the transfer of both hot and cold temperatures.

While insulating paint purports to work as a result of the microspheres forming a thin, heat-resistant bond, it relies on relatively new science and, to-date, independent large-scale testing is lacking. There has been a handful of small tests, including one conducted by Cold Climate Housing Research Center, which concluded that in cold climates, the insulating paint tested would not “be effective in reducing energy costs for residential homes.” The Florida Solar Energy Center conducted tests on both standard and insulating paints and concluded that insulating paint had “no significant advantage over ordinary paints.” The Federal Trade Commission (FTC) cracked down on at least one company for misrepresenting its paint as being equal to seven inches of fiberglass insulation. As of yet, no R-value has been determined for insulating paint. On the flip side, EnergyIdeas Clearinghouse, a non-profit publication, in conjunction with Washington State University and the Northwest Energy Alliance, reported that Insuladd paint reduced heat gain by “approximately 20 percent when fully exposed to the sun.” That means the paint could conceivably produce an energy benefit if painted on the exterior side of a house that faced the hot summer sun. The report also stated that when painted on interior walls, however, “reductions in heat loss and gain are negligible.” When the goal is to reduce the amount of heat transfer produced by the sun, virtually any white or light colored paint will perform better than a dark paint on exterior house walls because light-color paint reflects heat away rather than absorbing it. But more importantly, so far there is no paint that will take the place of good insulating practices. Most local building codes require a specific amount of insulation, measured in R-values, for walls and ceilings. Your best bet is to follow a well-designed plan for keeping energy costs down, which includes installing standard insulation materials, such as fiberglass batts or blown-in cellulose filaments, in addition to installing energy-efficient windows and doors. Source: https://www.bobvila.com/articles/insulating-paint/
0